The challenging Kilimanjaro Trek has increasingly become the one quest that every climber has in their bucket–list. If you are also dreaming of viewing the curvature of Earth of the top of the World, Climbing Mount Kilimanjaro should be your next travel goal.

What are the best things to do in Kilimanjaro? What do climbers eat, drink on Kilimanjaro? What is the cost of Climbing Kilimanjaro? If these are some questions that pop-up in your mind while planning your Kilimanjaro Climbing Adventure, Jerry Tanzania Tours is here to answer all your queries here. So let’s plunge into it right away!

An Overview Of The Kilimanjaro Trek

Duration: 5 to 10 days (including ascent and descent) depending upon the route

Level of Difficulty: Even though climbing Kilimanjaro does not require any professional training but due to its altitude, Mt Kilimanjaro trek is considered to be one of the most strenuous treks in the world. 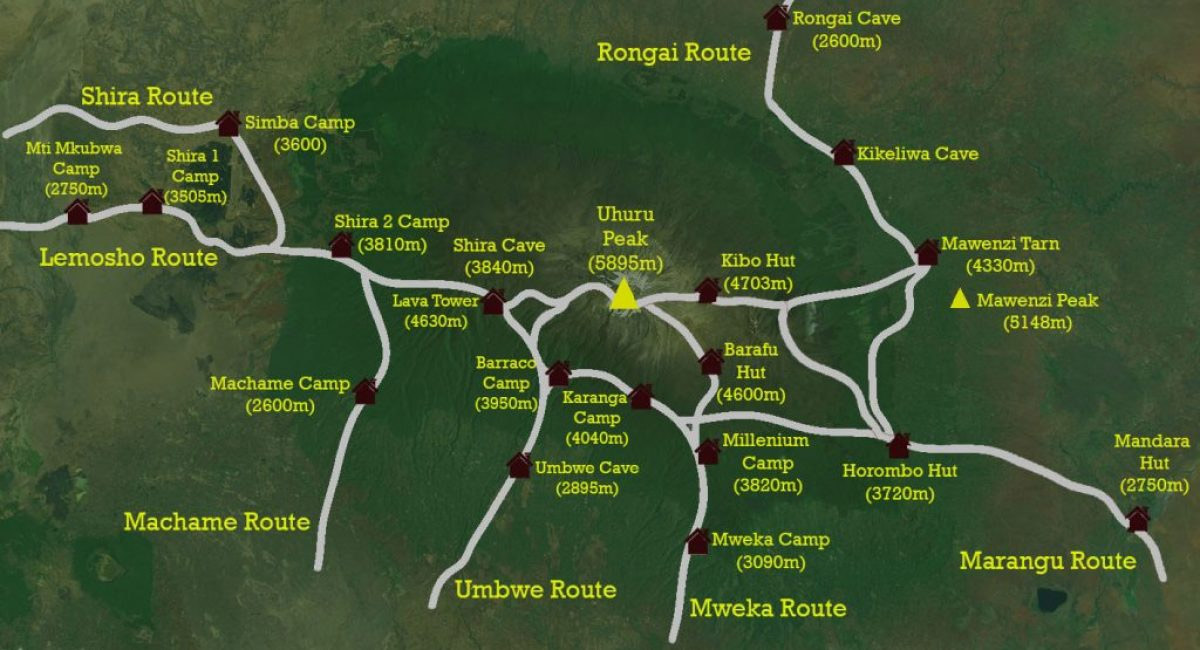 How to Get to Kilimanjaro?

To get to Kilimanjaro the closest International Airport is Kilimanjaro (JRO), and for the climbers coming from Europe, KLM (Delta Air Lines) has a daily non-stop flight from Amsterdam to JRO. Apart from this Air Viva offers connections between Kilimanjaro and several domestic airports, such as Arusha ($75).

Training and Preparation for the Climb

Although many tour operators promise an easy climb to Mount Kilimanjaro, Climbing Mount Kilimanjaro is not that easy and great planning and preparation are essential to help you reach the roof of Africa.

What are some of the best Kilimanjaro Lodgings?

On your Kilimanjaro Trip you can stay in the following hotels and lodges in Arusha and Moshi:

The Kilimanjaro Climb Cost for Private and Group Climbs differs due to various factors like several climbers, duration of the climb, and the choice of routes. Climbing the mountain is not cheap. Kilimanjaro Trek Cost is around $2000 - $4000 per person per day and may vary on the group and private climbs. We at Jerry Tanzania Tours provide you mid-range and luxury climbs whose Kilimanjaro Trek Price $250 - $300 per day, per person.

When is the Best Time to Climb Kilimanjaro?

The Best Time To Climb Kilimanjaro is in the peak seasons from mid-June to mid-October. As per Jerry Tanzania Tours, the best months to climb Kilimanjaro is from January, February, and September. Other months like July and August are also good but are colder compared to other months.

The Kilimanjaro Climb Price also varies, according to the time in which you choose to climb Kilimanjaro. The prices of Kilimanjaro tour packages are high in peak seasons and less in low seasons. 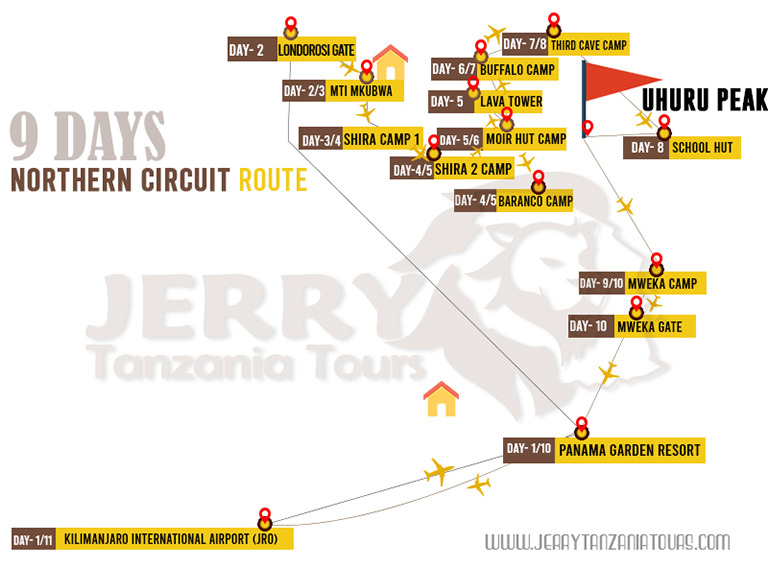 The seven-day trip to climb Kilimanjaro, trekking on the Rongai Route is the real adventure you will have on the mountain. 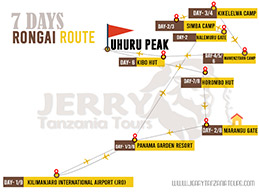 The eight days Lemosho route trip is the longer alternatives but provides better acclimatization to trekkers. 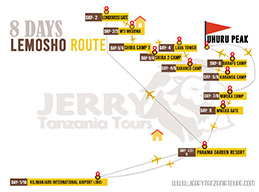 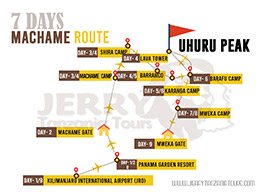 Before starting your Kilimanjaro Trek you must be aware of the following Mount Kilimanjaro Facts:

What are some of the Best Things to Do in Kilimanjaro?

On your Kilimanjaro Trek, you can visit the Kilimanjaro National Park Hiking day trips. There exciting Kilimanjaro trip is for those who do not wish to go on Mount Kilimanjaro Hike yet wish to experience the parks' distinct ecosystem, spot some wildlife, and get a glimpse of the summit close-up.

Kilimanjaro Hike takes a minimum of 5 days and a maximum of 10 days depending on the Kilimanjaro Trails. Among the seven routes officially sanctioned for climbing Kilimanjaro and two routes used for descent. These are:

Choose the Best Kilimanjaro Trek and some of the most affordable Kilimanjaro Climb Price with Jerry Tanzania Tours and we promise you will not regret choosing us. With over 30 years of experience in providing Tanzania Tourism, we are the number one travel and Tour Company in the country and provide more than 95% success rate on Mount Kilimanjaro. Kilimanjaro Summit's success is a must for you when guided by our excellent Kilimanjaro Porters and Guides.

Contact us now to start booking the best packages with us today!

The main entry requirements are Passport which is valid for 6 months after intended length of stay, residence address, one blank page photo

copy of passport to get the Kilimanjaro Visa. Yellow fever and malaria vaccination. Other requirements are, The US Centre for Disease Control and Prevention (CDCP) recommends the following vaccinations and certificates: Typhoid, Hepatitis A, Hepatitis B, and Rabies. Additionally, the CDCP recommends routine vaccinations for measles/mumps/rubella (MMR), diphtheria/pertussis/tetanus and polio.

Mount Kilimanjaro has 5 of its best Kilimanjaro Trek to climb to the roof of Africa. You will need to make sure the route which you have chosen is the right one.

Best Route To Climb Kilimanjaro would be very confusing as each of the routes has its own unique way of attraction. However, there are few things which you can consider for choosing the best Kilimanjaro Trek. Here are some:

The main recommended Kilimanjaro Trek is Lemosho Route and Northern Circuit Route. These route has the longer days and gives you time for proper acclimatization. Apart from these routes, you can go with Machame Route, Marangu Route and Rongai Route which also make your climbing more interesting.

The Kilimanjaro Climb Cost will vary widely and may cost in between $1000 to $4000 according to your preferences.

You should remember; climbing Kilimanjaro is not a cheap holiday. However, there are chances to save money in every corner but you should know how to save money with all the comforts enjoyed. The true cost of Kilimanjaro climb depends on the best tour operator. If the operator drops prices, they will need to cut expenses to stay profitable. This is an important Kilimanjaro Faq’s as you should be aware of extra charge you are paying. No one can change the Kilimanjaro National Park fee as it is decided by KINAPA.

For the questions related to “Where do you fly into to climb Kilimanjaro?” you can fly from Dar es Salaam International Airport to Mount Kilimanjaro.

The highest Kilimanjaro Success Rate is offered by Lemosho Route

and Northern Circuit Route. It has a success rate of above 95% and gives you more time for acclimatization. The long itinerary of these routes makes it a wonder for the climbers to summit the highest peak of Africa. These routes offer gives you more time to sleep in the low elevations and spend more time on the mountains. The accommodation facility is camp based and all the camps are equipped with essential requirements like; sleeping bag, flush toilet, bucket shower and a separate dinning tent. It also provides you adequate liquid on the top. 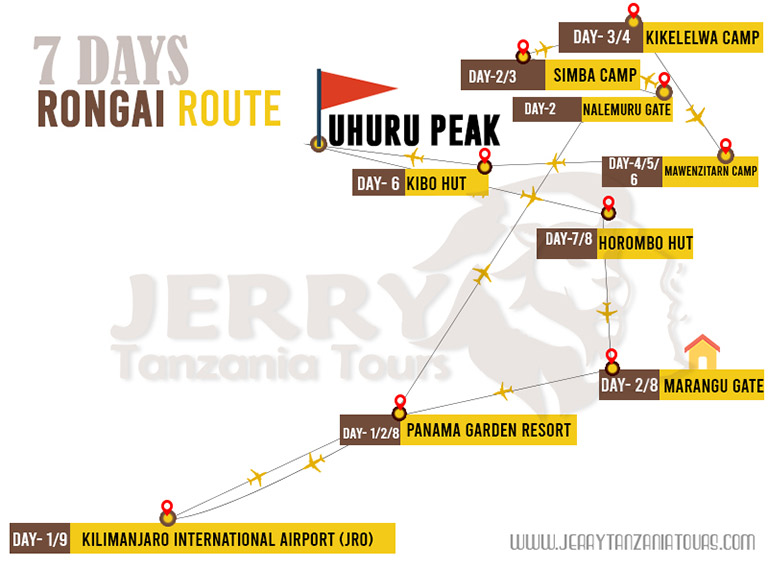