We at Jerry Tanzania Tours are here to answer these questions and inform you more about the gorgeous Kilimanjaro Trails. So let’s get started!

How did the Climbing Mount Kilimanjaro Trails begin?

Effect of Climate Change on Kilimanjaro

How did the Climbing Mount Kilimanjaro Trails begin?

After volcanic eruptions, millions of years ago three peaks of Mount Kilimanjaro were formed. Shira (one of the volcanic cone) is now extinct and eroded, while the other two volcanoes (Mawenzi and Kibo), after subsequent eruptions, ‘melted’ together. The highest peak is Kibo with its famous Uhuru peak at almost 6000m above sea level. 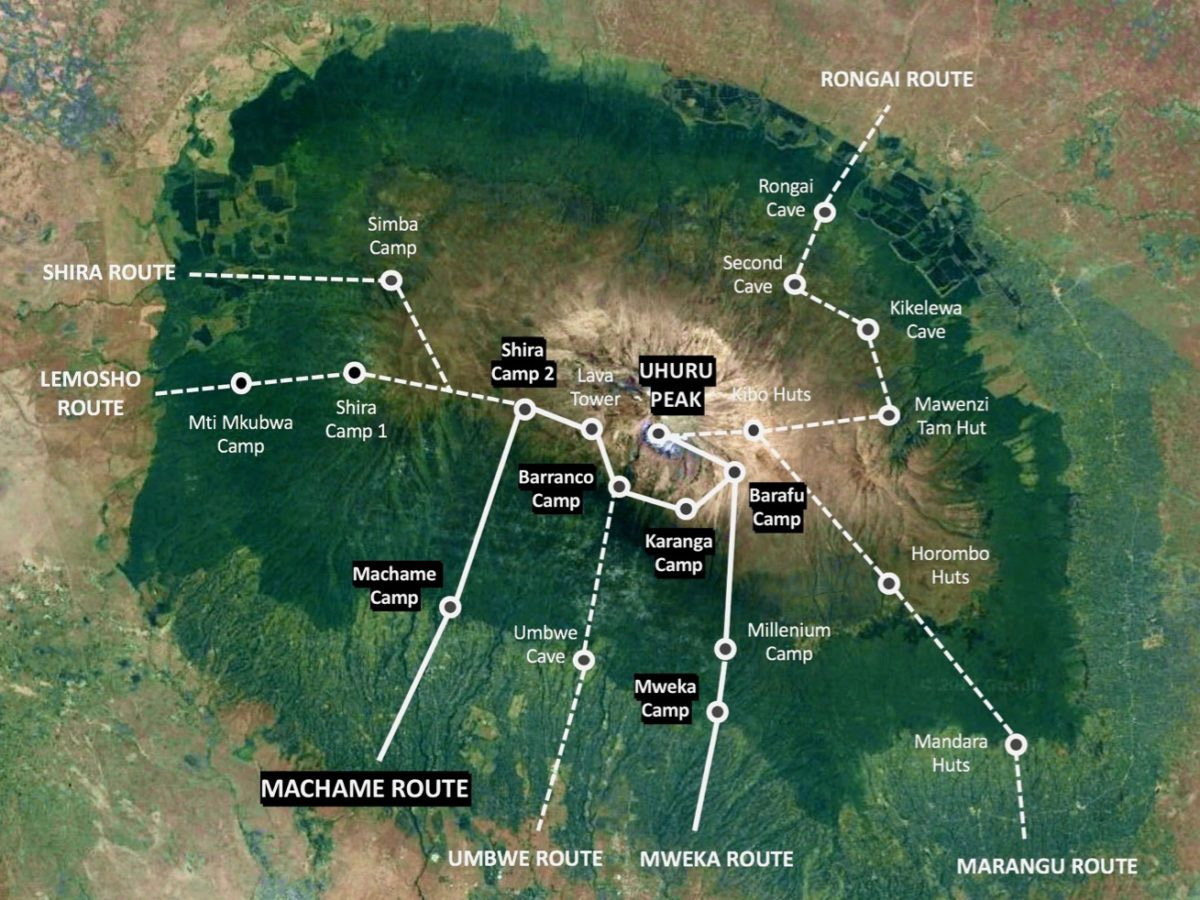 Thereafter, the annual climbers on Mt Kilimanjaro Trails started to increase manifold, and today we see the experienced, as well as new trekkers, Climbing Kilimanjaro fearlessly every year. Below are some of the Kilimanjaro Trail Records set by some extraordinary people on the climbing Kili.

The Kilimanjaro Trails Difficulty is a common concern of many climbers who are climbing Kilimanjaro for the first time. However, even though the Mt Kilimanjaro Trails is challenging, it is not a technical climb as the Himalayas or Andes. A good acclimatization period is, however, essential to make Kilimanjaro Climb Successfully.

It’s not a secret that Mount Kilimanjaro experiences numerous deaths and according to the Kilimanjaro Christian Medical Centre in Moshi, over 25 people died from January 1996 to October 2003 while climbing the mountain.

There are various mythologies related to Climbing Mount Kilimanjaro. According to a legend, there are ivory-filled graves of elephants and a cow on the mountain. The cow named Rayli produces miraculous fat from her tail glands. Rayli will blast a powerful snort and blow any man down onto the plain if he tries to steal such a gland.

Effect of Climate Change on Kilimanjaro

While climbing Mount Kilimanjaro is every climber’s dream, the ecological footprints that we leave on the Kilimanjaro Trails along with the global climate change are affected by the snow-covered mountain peak of Kilimanjaro.

On the Kilimanjaro Trails sadly, the ecological and natural problems are escalating, particularly at Crater Camp. This is the place where detritus and human feces have accumulated to such an extent that the camp may soon be closed. However, recent cleaning efforts have started to avoid closure.

On the Kilimanjaro Trails, there are five distinct climate zones. Among these are:

Let’s have a look at these in detail:

The cultivate Zone is recognized as the bushland zone which is the lowest zone on the foothills of Mount Kilimanjaro in Northern Tanzania. Many assume this zone to be the latest interesting zone, as it is settled under cultivation.

In this zone, the mountain receives little rainfall, and the temperature of this region can reach over 100° F during the day.

The Kilimanjaro Trails is experiencing changing and we at Jerry Tanzania Tours are here to untangle the invisible connections between human land use, regional climate conditions, and local biodiversity.

This changing biodiversity is not just challenging but also irreversible. We at Jerry Tanzania Tours work towards leaving minimum ecological footprints on the mountain and strive towards sustainable climbs to protect nature.

In the entire Kilimanjaro Trails Length, you will come across numerous Kilimanjaro Flora and Fauna. In the dense rainforest at 1800m – 2800m, you will find the next ‘level’ of vegetation. This Rainforest zone receives 1000 to 2000mm of rain yearly.

So Which Kilimanjaro Trails Should You Choose?

Before you can choose Kilimanjaro Routes you need more information and get to know the different between the routes. There are seven established routes to climb on Mount Kilimanjaro

If you are looking forward to having an extraordinary Kilimanjaro Hike, enjoy the best of a typical day on Kilimanjaro, and strive to complete the Kilimanjaro Summit, watch the world from over 6000m, we at Jerry Tanzania Tours are here to assist you in doing the same.

The Complete Kilimanjaro Climb Cost and Kilimanjaro Packing List, have been discussed in detail, and to get more info regarding the same we suggest you visit these pages. Our Kilimanjaro Guide and Porters are extremely friendly and assist you constantly 24/7 hours to help you reach the summit successfully and take care of your Kilimanjaro Safety.

To book your customized trip packages with us, contact us today and speak to our travel experts directly.

Mount Kilimanjaro has 5 of its best Kilimanjaro Trails to climb to the roof of Africa. You will need to make sure the route which you have chosen is the right one.

Best Route To Climb Kilimanjaro would be very confusing as each of the routes has its own unique way of attraction. However, there are few things which you can consider for choosing the best Kilimanjaro Trails. Here are some:

The main recommended Kilimanjaro Trails is Lemosho Route and Northern Circuit Route. These route has the longer days and gives you time for proper acclimatization. Apart from these routes, you can go with Machame Route, Marangu Route and Rongai Route which also make your climbing more interesting.

The highest Kilimanjaro Success Rate is offered by Lemosho Route

and Northern Circuit Route. It has a success rate of above 95% and gives you more time for acclimatization. The long itinerary of these routes makes it a wonder for the climbers to summit the highest peak of Africa. These routes offer gives you more time to sleep in the low elevations and spend more time on the mountains. The accommodation facility is camp based and all the camps are equipped with essential requirements like; sleeping bag, flush toilet, bucket shower and a separate dinning tent. It also provides you adequate liquid on the top.

Known as the "Coca-Cola" route, the Marangu route is a classic climbing route on Mount Kilimanjaro. It is the oldest, most well established route. Many favour the Marangu route because it is considered to be the easiest path on the mountain, given its gradual slope.