Kilimanjaro is the highest freestanding mountain in the world, but it isn't a mountain! At least not in a traditional sense. Actually, it’s a giant stratovolcano that began forming about a million years ago and is composed of many layers of hardened volcanic ash, lava, tephra, and pumice. Basically, all the fragmented material fell out from a volcanic eruption. But what is the Kilimanjaro Height?

Mount Kilimanjaro enjoys a reputation of being the highest peak among the rest of the seven summits in the world. Having said that, you’ll be most astounded to know that Mount Kilimanjaro Height has changed several times.

Well, maybe the actual height of Kilimanjaro hasn't, but according to the official figure for it has. Even today, you’ll find several numbers to choose from for the altitude of Kilimanjaro.

Afterward, Dr. Hans claimed that he had climbed to 19,833 ft or about 6045 m. Clearly, the height is exaggerated. The colonial authorities in Germany later adjusted that figure to 5892 meters. It remained as the official Height Of Kilimanjaro until 1952.

Later that year Mount Kilimanjaro was mapped by British cartographers. The new official Mt. Kilimanjaro altitude was 5895 meters or 19340 ft.

This figure was further written on the sign at Uhuru Peak as well. This is the figure you will find in most resources and information materials about Kilimanjaro, including all the websites.

But the UNEP/WCMC (United Nations Environment Programme/World Conservation Monitoring Centre), in their official fact sheet about Kilimanjaro National Park, states the height of Kilimanjaro as 5893 meters.

Obviously, technology has improved a lot since 1952. Therefore a team of specialists re-measured the height of Kilimanjaro in 1999. They used the newly available GPS technology at that time.

Previously when GPS technology was used to measure Mt. Everest. The data revealed the height to have shrunk a few meters. And Mount Kilimanjaro met the same fate...

The recorded data came out 5892.55 meters. Which meant that Kilimanjaro had shrunk by 2.45 meters.

With upgraded technology, the same process was again conducted in 2008. The exercise was repeated. And surprise! According to the GPS and gravimeter, Kilimanjaro is now only 5,891.8 meters high! (19,330 ft).

It is safe to assume that this latest reading is the most accurate.

But it is still unclear whether the height loss is a result of actual shrinking or a result of inaccurate technology of ‘the then’. Or maybe a combination of both.

So far everybody remains pertaining to Kilimanjaro being 5895 meters high.

If that Kilimanjaro Height is good enough to appear on the UNESCO World Heritage Listing For Kilimanjaro National Park, then it should be good enough for all of us. So just go with the flow...

The Height Of Kilimanjaro's Two Other Peaks

As you know Mt. Kilimanjaro is actually a volcano, or rather three volcanoes, Shira, Kibo and Mawenzi. While both Mawenzi and Shira are extinct, Kibo is merely dormant. The highest peak of Uhuru Peak is on Kibo.  Even though the Mawenzi has been significantly eroded over the years, it still retains a striking volcanic shape and makes for great photographs on your way to Uhuru Peak.

Height of Kilimanjaro vs. Other summits

Here is a chart that shows the relative heights of the Seven Summits with regard to the 14 highest peaks of the Himalayas.

How High Is Mount Kilimanjaro?

But interestingly, both Everest Base Camp’s (EBC) – South and North – are below the summit of Kilimanjaro. Having said that, most climbers take upwards of 8-10 days to reach EBC.

Even though it is possible to start Kilimanjaro Climb within 4-5 days it is highly risky. Because the rapid ascent of Mount Kilimanjaro poses a risk of Kilimanjaro Altitude Sickness.

Where Does Mount Kilimanjaro Rank In The Seven Summits?

As you know the Seven Summits are the highest mountains of each continent.

Climbing all the Seven Summits, the highest peaks of each continent is one of the most respected accomplishments of any sport.

The peaks that comprise the seven summits depend on the different ways of considering territorial divisions. As the two most popular lists differ concerning the highest peak of Oceania. One has Mount Kosciuszko is the tallest summit in Australia, while the other has Carstensz Pyramid. 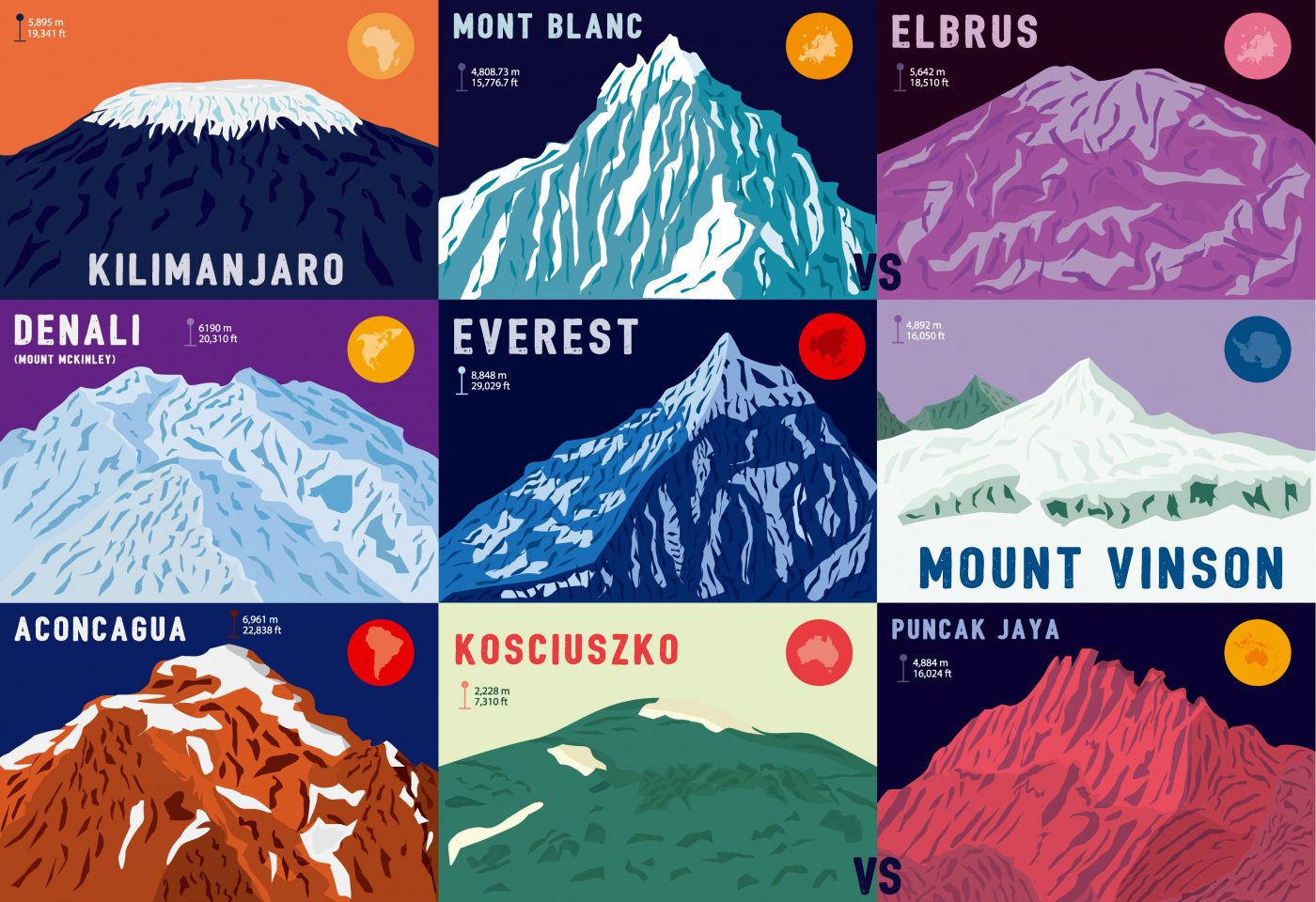 You shouldn’t stress about terminology, yet sometimes it can make a big difference.

On this page, we have discussed the “height” (in meters and feet) of Mt. Kilimanjaro because that’s the world people generally use to search. But in reality, what we really mean by “height,” is actually “elevation.” And what you really want to know is “climbing height”, or “prominence” instead.

Elevation usually refers to the height with regard to sea level. So elevation is a more specific concept that compares height with the widely accepted concept of sea level. But we all know that sea levels fluctuate with tides.  Most people get that we consider an average sea level globally, but it’s actually difficult to understand this, or at least so, sometimes it gets difficult to measure it, especially when the sea is thousands of kilometers away and well over the horizon. And of course, we’re living in an era where sea levels are rising, and mountains shrinking?

Altitude is measured differently. For example, an altimeter estimates altitude based on its air pressure. This is not a bad idea because air pressure correlates with elevation. Provided you’re considering the effect of air pressure, such as the weather. Otherwise, they might cause a less accurate measure.

Climbing height refers to the point from which you begin to climb. If you’re going from sea level to the summit, then the climbing height and mountain’s elevation would be equal.

Sometimes, when a mountain has multiple trails and starting points, or if the up-and-down nature of the trail is so great that climbing height becomes irrelevant, we might instead look for the mountain’s prominence.

The word “prominence” in topographic geography refers to the extent to which a mountain sticks out vertically above those around it. Having said that, the exact definition of prominence is a bit more complicated: The prominence of a peak is the minimum amount one would need to descend from the summit before climbing the higher peak.

While Everest, the highest peak in the Himalayas, has a prominence almost equal to its total height: 8,848 meters (29,029 feet), Mt. Lhotse, whose total height is a staggering 8,516 meters (27,940 feet), barely ranks on lists of mountain prominence. That’s because the bulk of Lhotse’s height is also Everest’s height.

With a prominence level of 5,885m, Mt. Kilimanjaro is the fourth “highest” in the world! Only Everest, Aconcagua (South America), and Mount McKinley (North America) rank higher.

Can you reach the top of Kilimanjaro without any other’s help? Yes you can, Kilimanjaro Height cannot bother you that much but tour operator for Kilimanjaro is an added option as well as a safe option, as they have the option for Rescue during their Services for Climbing Mount Kilimanjaro. Contact Jerry Tanzania Tours today and make your climbing via Kilimanjaro Height really easy! 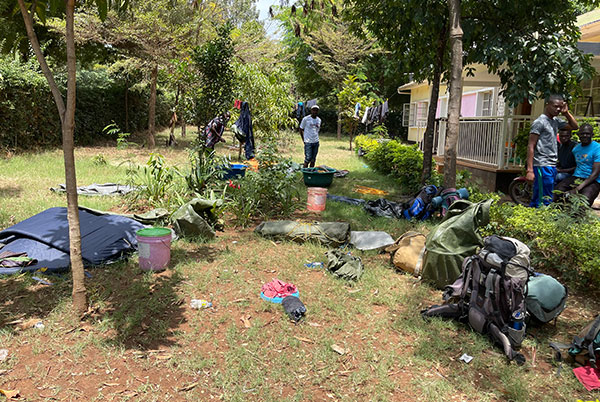 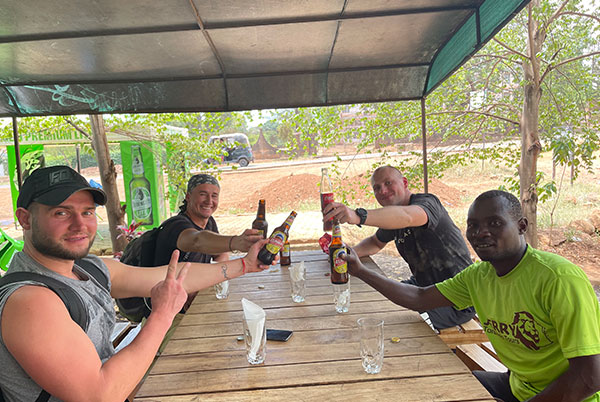 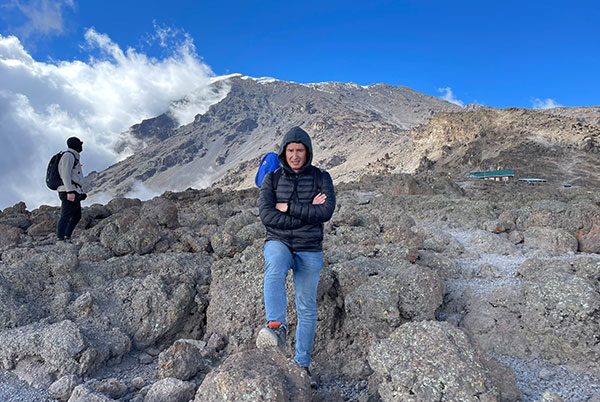 Mount Kilimanjaro is a latent volcanic hill in Tanzania having three volcanic cones (Kibo, Mawenzi and Shira). It is the single highest free standing mountain not only in Africa but in the world. It stands at the height of 5,895 metres (19,341 ft) above sea level and about 4,900 metres (16,100 ft) above its plateau base.

People must aim to build up their endurance by hiking from 3 to 8 hours once a week. With that body balancing by yoga is vital, as this will be what you are doing on Climbing Mount Kilimanjaro. Practicing 500m/ 1,640 feet of altitude in a hike to 1,000m/ 3,280 feet in the weekend trek. Building slowly over months is significant.

Mount Kilimanjaro is situated in Tanzania. It is the African continent's highest altitude of 5,895 meters (19,340 feet). The majestic mountain has snow-capped volcano. Oxygen level is very low at this point which can face during Kilimanjaro Climbing Tours.

Kilimanjaro acclimatize from its base roughly around 16,732 feet (5,100 meters) from the plateau near the Tanzanian city of Moshi. You can experience it on you Kilimanjaro Trekking.